The Kraken is perhaps the most famous mythical representation of the octopus. It’s a legendary, giant sea monster that is said by some to be more of a squid than an octopus. The legend has apparently been traced to Scandinavian folklore that holds that the Kraken lives in the deep ocean off the coast of Norway  and Greenland and has been known to terrorize sailors.

Well, now it’s terrorizing Londoners as a vehicle wrap. This wrap has to be one of the most extensive and effective ever. The bus actually looks like it is being crushed. Sometimes one sees clever and artistically-appealing vehicle wraps but five minutes later the name of the product or service being promoted has been forgotten—which of course defeats the purpose of spending on the wrap in the first place.

But after seeing this bus, who is going to forget The Kraken Black Spiced Rum?

A bit of technical information was offered by the person that posted this image on LinkedIn: “Using a mix of one-way film on the windows and vehicle wrapping films on the front and sides, a fleet of 5 branded buses were printed and installed within three days leading to one of the most memorable wraps I’ve ever seen.”

Hopefully it will serve to inspire great vehicle wraps here.

You can see more of this project at this link. 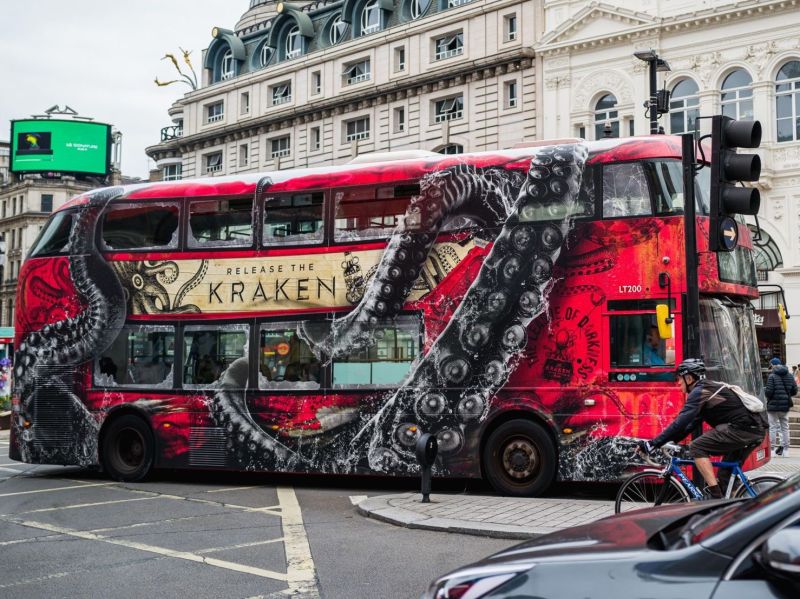