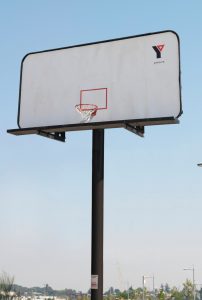 Message delivered in a nanosecond.

We’ve all heard that a picture is worth a thousand words. I doubt if there’s ever been a better example of the wisdom of this expression than a certain YMCA billboard. It had a basketball hoop sticking out of the middle and the YMCA logo in the upper right corner. There was nothing else on the billboard. A basket ball hoop and a logo on a plain white background — nothing else.

Only a complete idiot or someone intentionally obtuse wouldn’t instantly understand the message. It could be absorbed in a nanosecond. You’d have to be driving by at way over any legal speed limit to not have time to get the message. Leonardo da Vinci once said: “Simplicity is the ultimate sophistication.” He probably didn’t have billboards in mind but the concept applies to billboards. This board imprinted on one’s brain an image of a basketball hoop and the YMCA logo — message delivered. But better still, you can bet people told their friends about the clever billboard — message delivered some more.

I hope the designer won an award or at least received a handsome bonus. This board was sheer genius. Not all messages can be delivered this way but, with some thought, there are probably many.